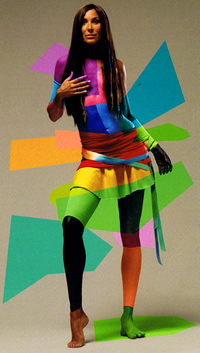 French singer and songwriter Zazie is a platinum selling artist in her homeland, and her album releases in the UK are well overdue. 2009 is the year that Wrasse records have set to release two of her albums to the UK public.

Zazie's music ranges from upbeat rock to laid back, moderate tempo pop with thought provoking and witty lyrical content. Her music career began with her debut album "Je Tu Ils" in 1992, and throughout her career has released many albums ("Zen", "Made in Love", "La Zizaine", "Rodeo", and recently "Totem"), 4 of which have sold to platinum status in France.

Zazie's popularity has spawned from her original lyrical writing and her exuberant personality from which her fans have started terming "Zazisme". Her personality, coupled with her impressive height has made her an impressive figure and popular figure within the French community.

She has collaborated with, and written for many French artists, Johnny and David Hallyday, Patricia Kaas, Florent Pagny and Jane Birkin to name a few, which has shown how respected a songwriter she is with other musicians. She has also recently written four songs for the "Nouvelle Star" winner Christophe Willem.